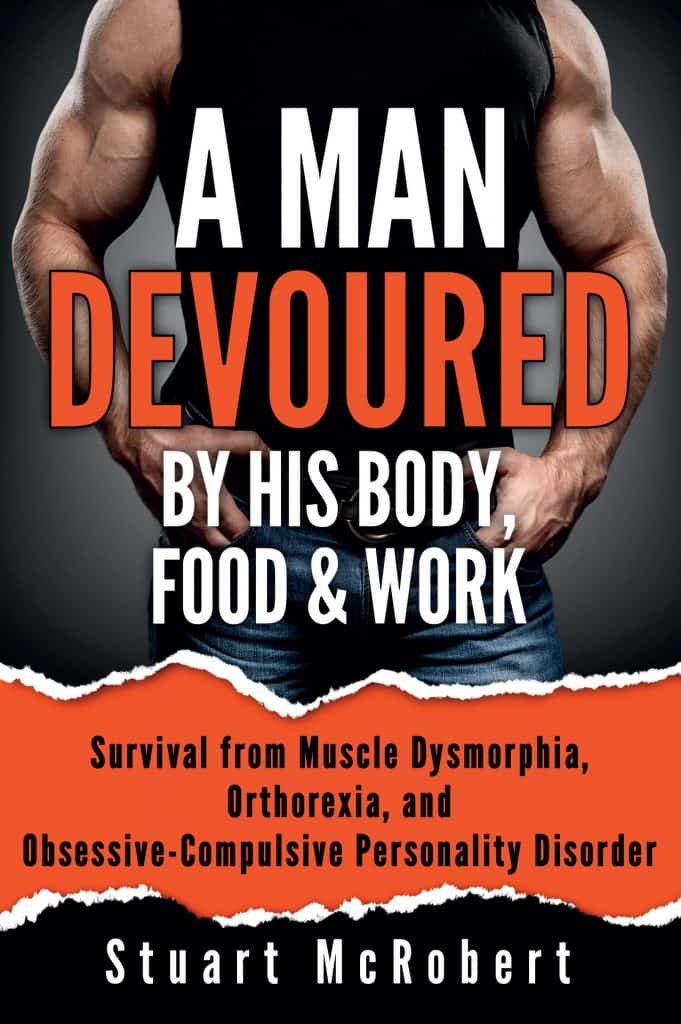 “I have never read a book so revealing and yet also so hopeful. It is truly groundbreaking.

“Stuart McRobert has been a very productive writer on physical training for over 35 years. So it is to his great credit that his latest book may be his most important even though it is not about the ins and outs of physical training. If you are looking only for another training book, this one is not for you. But if your concerns are broader, and include quality of life and mental health—regardless of whether or not you train—Stuart’s latest book is a must read.

“With startling and riveting details, Stuart chronicles the three major mental disorders that afflicted his life for over 45 years. The disorders produced sustained major struggles that included periods of extreme unhappiness and despair. His account of his problems is fascinating. But more important, and yet also fascinating, is what Stuart did about his problems, which he also describes in detail.

“With the help of a counselor, and logical integrations of other ways to improve mental health, Stuart immersed himself in intensive therapy but without any medication. There were five elements to his therapy and healing. The outcome was that he did not simply change bits of his behavior. Rather, he transformed his entire life for the better, including his relationship with himself, and his relationships with others.

“Even for people who do not have any of the kinds of problems Stuart dealt with, this book presents a remarkable story. But for those people who do have some aspects of Stuart’s problems, the book presents hope and some logical roads to follow in seeking help and guidance, and charting new and improved pathways in life.”

“Stuart, are you still passionate about bodybuilding and strength training?”

When applied as I teach it, bodybuilding training—and strength training in general—is the single best form of exercise because it produces a host of major internal and external benefits.

Now that my mental health is much improved, my physical health has also improved. I enjoy my training even more now than I used to before, and I may also be getting even more benefits from my workouts now.

And as from April 10, 2021, I’ll be publishing the all-new, monthly HARDGAINER 2.0. So, my writing and publishing have also been revitalized by the great improvement in my mental health.

IMAGINE . . . having a “dream” life of family, material affluence, meaningful work, and autonomy, but being miserable. The person with that “dream” life was me, Stuart.

For over 40 years I battled with attitudes, beliefs and behaviors that are commonly labeled as “symptoms” of three so-called psychological disorders—muscle dysmorphia, orthorexia, and obsessive-compulsive personality disorder (OCPD). My struggles started in earnest when I was 15 years old, in 1973. The consequences were grave.

No matter what improvement I made to my physique, it dissatisfied me even though many men envied it and many women admired it.

My training and my eating obsessed me, but even that intense dedication to bodybuilding didn’t yield the great physique I craved.

My “mental turmoil and struggles,” or “mental torment”—which is how I term my psychological problems—had profoundly negative effects on my life. I wasn’t dealing with minor personality quirks.

The severity of my problems increased through the 1970s and ‘80s—from my early teens through my twenties. But I never thought there may be something wrong with my mental health.

That I considered suicide during the 1990s and early 2000s should have made me seek help. But I considered seeking help to be weakness. I needed to “man up,” “pull myself together,” “be grateful for the good things in my life,” and “get a sense of perspective.” Those shame-based clichés were first inflicted on me during my upbringing, but didn’t help.

But I had an amazing external life during my decades of mental torment. Here are just some of the riches that couldn’t make me happy: Since the 1980s I’ve lived on a Mediterranean island that has a wonderful climate, and I have a supportive wife and two children. We’ve long been well-off, have had a luxury home in the capital since 1997, and a villa near the coast since 2002. I’ve long worked for myself from a home office, with autonomy, and I’ve had success as a writer and a publisher.

I had a laser focus on my external life—my body (and training it), my eating, where I lived, my family, my work, and so on. But that focus exacerbated the problems I had with my mental health (or internal life).

My long-suffering wife endured the effects on her from my mental torment, but our marriage was tempestuous for three decades. It caused us endless conflict and unhappiness.

The scrambling of my brain during the 40-plus years before I started therapy “stole my happiness,” my therapist told me later.

Finally, in September 2015, when I was 56 years old, I admitted something was profoundly wrong with me. My initial investigation—through the mainstream or “medical model”—revealed I had two sets of so-called symptoms that supposedly conformed with two so-called psychological diagnoses: muscle dysmorphia, and orthorexia. They were soon followed by the discovery of a third set of “symptoms” (including so-called perfectionism and workaholism), which supposedly conformed with the diagnosis of so-called obsessive-compulsive personality disorder. I’d had those three sets of “symptoms” for over 40 years. According to that medical perspective, I’d been mentally ill since I was a teenager.

My initial investigation followed the medical perspective. During that investigation I took responsibility for my mental health problems and their consequences. The “diagnoses” motivated me to seek help. (Often, though, distressing diagnoses make people fearful of seeking help.) My therapy started in January 2016. It gave me an alternative perspective on my “mental illness”—a “non-medical model,” to use my therapist’s term.

My therapist is Christina Sorokou. In this book I refer to her as Ms. C.

As reference points, here are summaries of two of the “diagnoses” of my so-called mental illness: “muscle dysmorphia” and “orthorexia.”

“Muscle dysmorphia” (“MD”) is characterized by a negative body image and an obsessive desire for a muscular physique. It’s also called “muscle-dysmorphic disorder.” It’s common among bodybuilders and strength trainees. To quote someone I know, “I’ve seen men built like Superman weep over this issue.” It usually affects men, but can also affect women. Not all bodybuilders and strength trainees are affected.

“Orthorexia” is an unhealthy relationship with healthy foods. It’s a fixation with eating “healthfully” as defined by the sufferer, with a very strong belief in the correctness of it. Some “orthorexics” suffer severe weight loss that gives the impression they have “anorexia nervosa.” I was one of them during some of the 1980s.

The majority of people with “symptoms” of “orthorexia” also seem to be exercise enthusiasts. Weight training, running and yoga are common examples. Exercise may be as big a focus of their lives as eating, and derived from the same motivations. That’s how it was for me.

“Muscle dysmorphia” commonly leads to self-obsession, dismay with one’s body no matter how much improvement is made, neglect of one’s education and career, relationship difficulties, discomfort with social settings, family problems, health issues, and perhaps the use of bodybuilding drugs. I endured all those effects except the drugs.

It’s particularly the severe manifestation of “muscle dysmorphia” that leads to the use of bodybuilding drugs, the inability to see the  consequences of self-abusive behavior, and even suicide.

“Orthorexia” also commonly leads to self-obsession, neglect of one’s education and career, relationship difficulties, discomfort with social settings, family problems, and health issues. It also leads to an obsession with one’s eating, and perhaps contempt for those who don’t follow the same dietary dictates. I endured all of those effects.

The root causes of my “symptoms” of what could be medically labeled as three “mental disorders” were threefold. First, the instructions in some of my genes—my nature. Second, my upbringing and socialization, and their shaming effects—my nurture. And third, some behaviors I chose in response to my nature and my nurture. Different “symptoms” and behaviors arise in other people from their particular wellsprings.

According to the World Health Organization, psychological problems are one of the leading causes of ill-health and disability. Mental health seems to be the most important determinant of individual happiness in developed countries. Many millions of people seek comfort through smoking, alcohol, overeating, unhealthy food, overworking, gambling, or other addictive behaviors. And many of them attempt suicide.

And many businesses exploit those who seek comfort through eating, smoking, drinking, or gambling, for example. There’s an urgent need for measures to prevent that exploitation. Teens and young adults need the greatest protection because their brains are especially vulnerable to addictions. Most adults with substance-abuse problems and addictions started smoking, drinking or using other drugs before they were 18.

Men are less likely to admit to mental health problems than women. And men are also less likely to take action to help themselves. Women outnumber men among therapy and counseling clients.

With the right therapy, those with mental health problems can cope and lead rewarding lives. I experienced the therapy myself with great success. But it had nothing to do with psychiatric drugs and institutions. (I’ve never taken psychiatric drugs, and nor was I ever prescribed any.) There were five elements of my overall therapy and healing. The first was talk therapy with a properly trained and licensed therapist. This book includes my session notes—a real-life case study. What I learned from some influential books led to three other elements of my overall therapy and healing. And the self-therapy from writing this book—writing therapy, or expressive therapy, or writing cure—was another element that contributed to my overall progress.

I was (and still am) a highly involved participant in my overall therapy. My self-inquiry produced self-awareness, self-knowledge, self-understanding and healing, which enabled me to take true control of myself.

This book details the five elements of my psychological self-care. Each helped me, but their synergism profoundly changed me for the better.

My journey may especially resonate with readers who have problems related to body-image issues, food, or “perfectionism” and/or “workaholism.” Of course, each reader has travelled a unique path with a particular background, which I can never know. But perhaps through reading my story, readers may be inspired to start their own self-inquiries that bring about their own realizations, self-awareness, self-knowledge, self-understanding, and healing. The particular process that worked for me may not work for others, but my story may help others find the processes that work for them.

I’m writing primarily to men, including young men in their teens. But many women also have mental health problems and may benefit from reading my story.

Although this book covers matters that are common among bodybuilders, strength trainees, and other exercise enthusiasts, it doesn’t have any instruction on bodybuilding or how to train.

Be the first to receive hardgainer.com articles & news